"How do y'all fit in that tiny trailer?"

Almost without exception, everyone we met on our five-state weeklong vacation asked us that very question.

It was not the question we expected to hear just a day or two before we left, because we were preparing to sleep in our 9' x 7' tent. But five days before we were to leave, I casually mentioned to The Missus that I wasn't exactly looking forward to sleeping on the ground for a week.

I swear within five minutes of internet searching she found several used T@G trailers for sale within a day's travel. In case you don't know, T@G trailers (built by NuCamp) are a well-designed and very popular "teardrop" trailer. Teardrop trailers have their roots in the Depression and gained popularity in the post WWII era. They were essentially a bed on wheels, usually with a simple exterior kitchen on the back.

The particular T@G model The Missus was looking for was the LX model which was about a foot wider than the regular model and contained a king-size bed. This gave us plenty of room for us and our monster dogs.

When I originally wrote the above, it didn't even occur to me that some people DO NOT sleep with their dogs. I don't understand such people or their motivations. Who could pass up a chance for the extra warmth, or the occasional tick crawling up the inside of your thigh? We have always slept with our dogs, and I'm grateful for that spacious 8 inches of mattress Hudson allows me every night.

The one we found had been well taken care of and had a few nice upgrades and accessories. Best of all, the sellers lived just a few miles away.

We bought it the day before we left. I then spent over 8 hours anxiously waiting at local U-Haul dealers as they installed a difficult hitch and wiring harness on our Honda CRV (that's a whole other story). 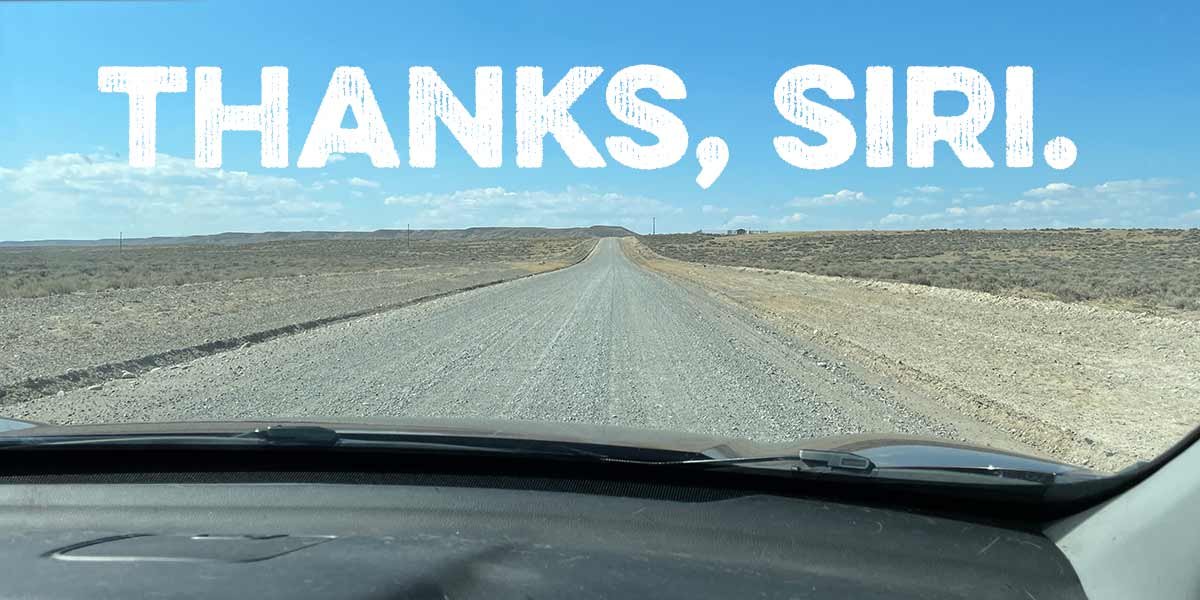 Our trip took us from the eastern edge of Washington, across the Idaho panhandle into Montana, then down to Wyoming and on to South Dakota and back. The Missus loves her iPhone, and set up the navigation using Siri.

I'm not sure the makers of Siri  – dwelling in the crowded urban landscape of Cupertino and working in a massive donut that can be seen from space – understand the vast emptiness that can be found in the wilds of Wyoming. They programmed Siri to only care about the quickest route, regardless of where that route goes.

After the fifteenth gravel road Siri sent us on, I began to wonder.

I'm not against gravel roads (I live on one myself), but after the first eighteen miles waiting for a left turn – ANY left turn – the magic of technology wears a little thin.

Siri tried to save us three minutes on one gravel route, but ended up costing us twenty because the cows refused to move to the shoulder.

I'm not saying Wyoming is thinly populated, but we passed a lady on Highway 16 with a non-vanity license plate. Her plate number was 41.

Our little trailer worked great following behind our Honda CRV. At most campgrounds we were surrounded by massive giant campers and motor-homes. It felt like we were tiny visitors in the land of giants. 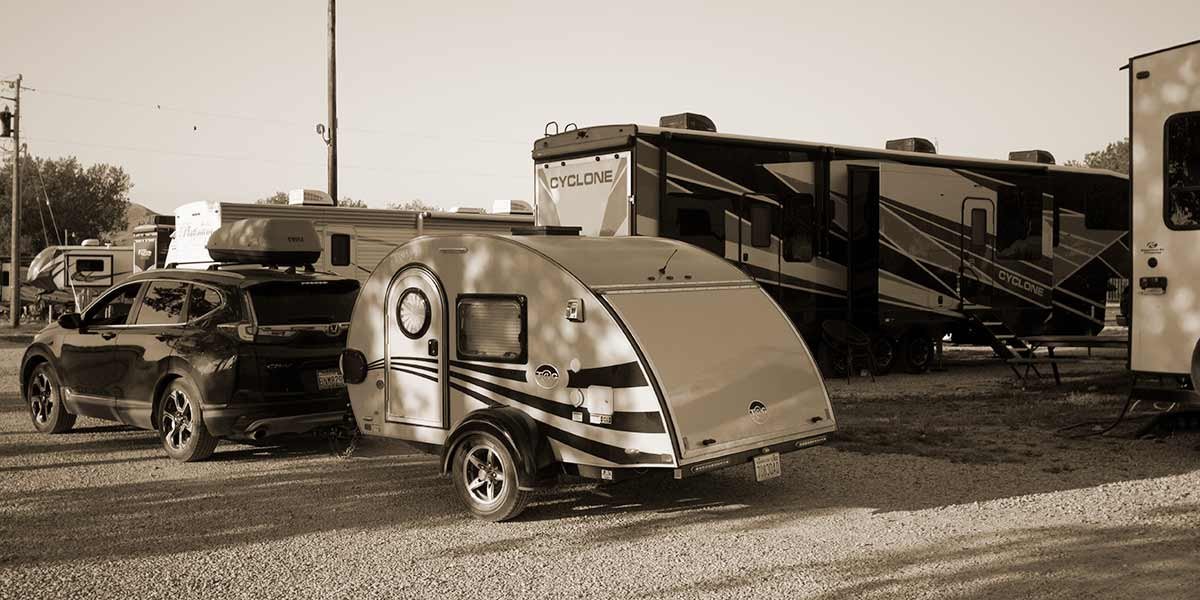 In the Land of Giants, trying not to get squished

Everyone asked the question, and we always smiled and explained how much room was inside, even showing the interior to a few people who remained skeptical.

Wherever we went we had the biggest dogs with the smallest trailer. 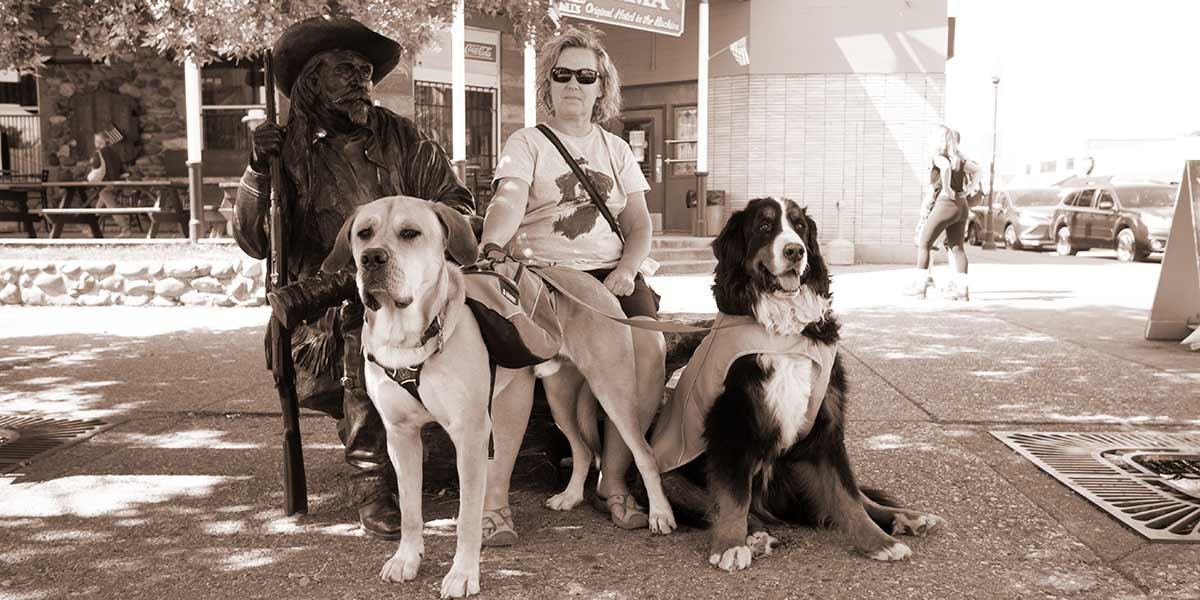 The lovely Missus, our two enormous dogs, and some guy named Bill Cody.

If we had planned our trip with the sole intention of meeting lots of people we could not have done a better job. Our presence was a curiosity that could not be resisted, and they all wanted to know…

"How do y'all fit in that tiny trailer?" 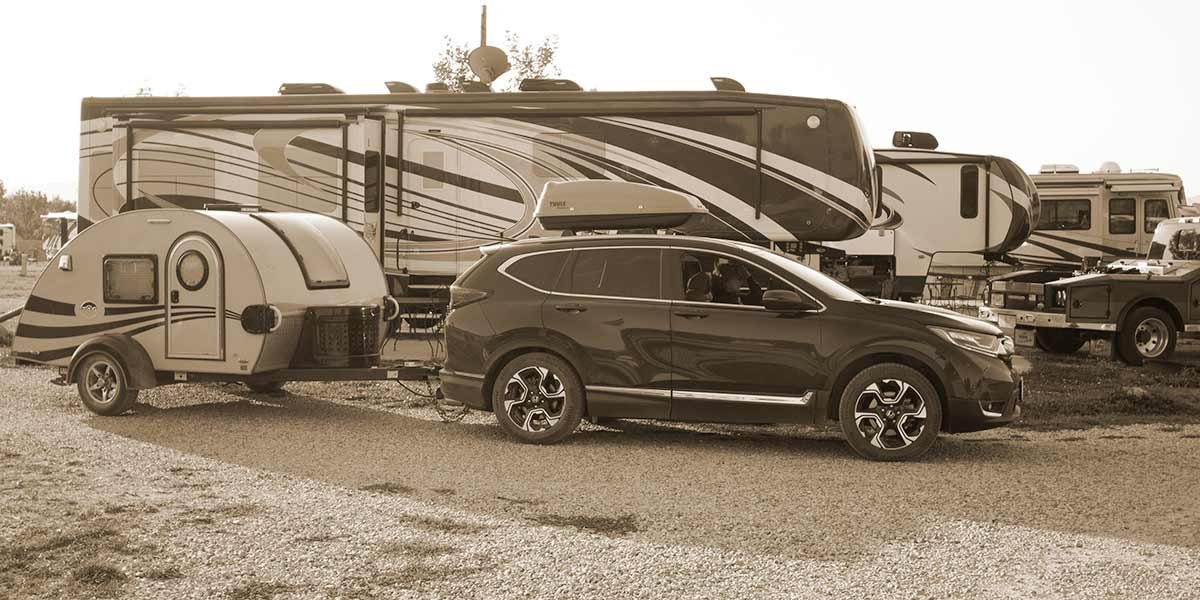