Last week, we went to our first Spokane Indians baseball game since 2019. It was a good night for baseball.

Last year's season had been cancelled because of the Kung Flu. The team took the opportunity of a lost season to make some changes.

They moved into a new league, doubling the number of games. More games meant an earlier start to the season, moving from a comfortable mid-June to an often chilly early May.

They also instituted changes to accommodate government regulations on Kung Flu, which I detailed in an earlier post.

Fortunately, I was not required to wear a stupid mask.

The result of filling only 25% of the stands is an unnaturally quiet evening of baseball. I should have brought a book to read. It's hard to make money in the minors if you can't fill the stands, so I hope this lunacy ends soon.

As we sat in our seats, virtually alone in our section, one of the batters hit a foul ball. It carried over the barrier net and landed right behind us. The Missus jumped up to grab it as it skittered around.

I remained sitting. It wasn't worth spilling my beer for a baseball, but I kept my eye on it as it pin-balled around the seats behind us. Eventually I reached back casually and scooped it up as it slowly rolled past my seat.

It was at that moment that tragedy struck: some of my beer sloshed over and spilled on my leg and the concrete below.

The crew at the stadium have a standard practice with foul balls. They run to wherever it came down in order to check that everyone is okay.

They saw me crying uncontrollably and came to investigate. When I told them what happened, they didn't seem very concerned.

This was the second foul ball I've corralled in my baseball watching career. I'm proud to say I never left my seat for either ball. I go to these games for leisure, not to field stray balls. 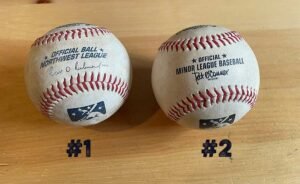 It wasn't a bad night for baseball. The temperature was unseasonably warm for early June, in the upper 80's.

We left early, after the seventh inning, but we have a good excuse.

Our habit these days is to wake up early in the morning around first light (a little before 5 a.m.), and by 8:30 in the evening, we're usually a bit wiped out. Add a couple beers and I start having trouble keeping my eyes straight, and open.

I'm getting old. But that's not news, either.