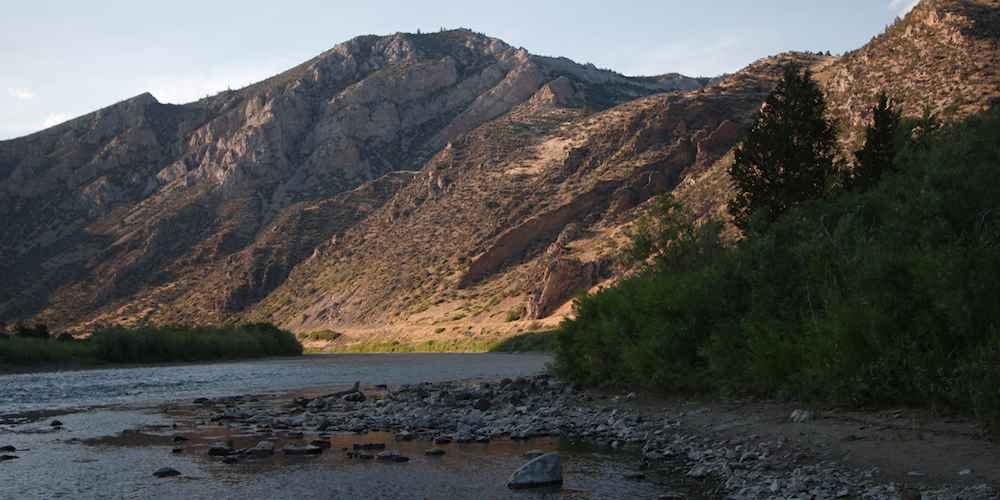 "I don't know if we're going to make it," she said, concern filling her voice.

The "Low Fuel" alert had been lit for half an hour. The tank indicator was as low as it could go.

"We're eight miles from the next town," I replied. "If we don't make it, I'll have a sixteen mile round trip on foot next to a busy freeway in ninety-seven degree heat, while carrying a full gas can half way. Turn off the AC. Turn off the cruise control and lower your RPMs."

Rolling into Alberton, Montana on fumes, we practically coasted into the gas station. Both of us were gritting our teeth. In the passenger seat, I peeled my white-knuckled fist off the dashboard.

"Whew!" said The Missus with a smile as she powered down the car.

Still tense, I replied, "I'll pump. You go in the store and buy a bottle of rum."

She tilted her head in question.

"I'm gonna have a stiff drink once we get to the campground. Maybe two."

I filled our fourteen gallon gas tank with 13.47 gallons of unleaded.

Montana is a big state with long stretches of territory without filling stations. But The Missus loves to gamble; and her favorite game is Gas Tank Lottery.

That's how our Montana vacation started. And that's how it almost ended.

We were headed back to Montana's Lewis & Clark Caverns State Park, hoping to spend a bit more time in that region exploring various sites and sights. Last year, we spent our last night at the campground, and vowed to return this year.

Of course, the dogs were with us. They are our American Express: we don't leave home without them*.

Having parked our [email protected] camper, we spent that first night relaxing in the park, meeting a few other campers, and generally letting the road tension melt away (easy to melt anything when the heat is in the upper nineties).

The next day, we loaded up and headed on the short drive to Virginia City (with plenty of gas).

Founded in 1864 after gold was discovered the previous year in nearby Alder Creek, Virginia City was the destination for many a miner and adventurer looking to make it rich. It had a wild and, at times dangerous history, becoming the site of Montana's first newspaper, and for a time serving as the capital of Montana Territory.

The town now is a popular ghost town, with many of the buildings dating back to the town's hey-day. They stand mostly unpainted and weathered, so you really get a sense of their age. I asked a local how it is that so many of the buildings are still standing and she told me the lack of humidity has preserved much of the wood structures. The town has been under the care and restoration efforts of the Montana Historical Society since 1997, when the state legislature voted to purchase the historic town (and nearby Nevada City) for historical posterity. 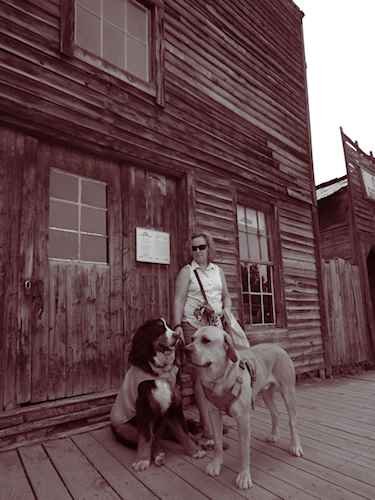 Vintage 1864 Photo: During its heyday, you could find all sorts of entertainment in Virginia City. Here are a performing bear with his pony, and a High-Dollar Sportin' Gal.

I've long been fascinated by the history of this region, and picked up several history books on Virginia City specifically, and Montana generally. 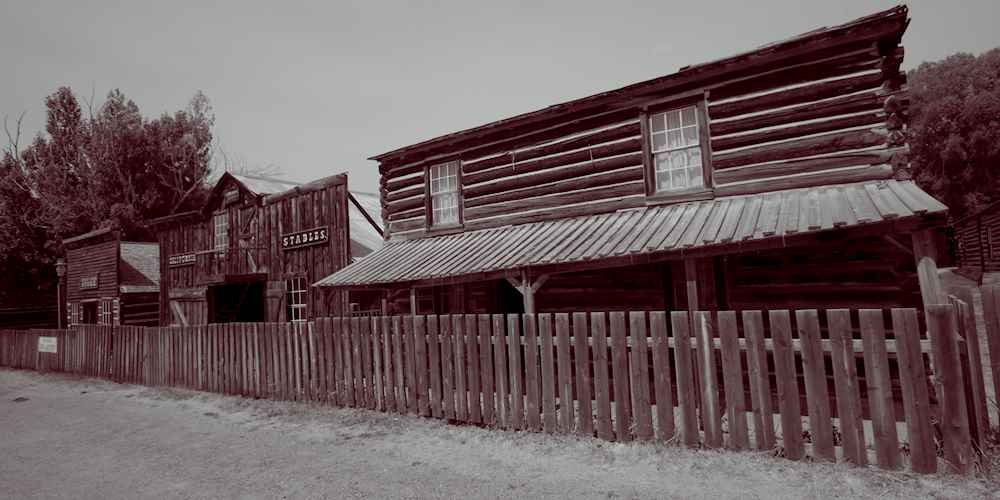 Many old buildings line the streets of Nevada City.

The sign reads in part: "Nine booming gold camps sprawled along remote Alder Gulch in 1863. Nevada City and Virginia City were the largest. In December, 1863, Nevada City's main street was the scene of the miners' court trial and hanging of George Ives. This event was the catalyst for the forming of the Vigilantes."

While traveling, I said to the wife, "Imagine there are no roads out here. No cars. No maps. You don't even know where to find water. There is the constant threat of attack by indians, though some are friendly enough. The trouble is you can't always tell who is going to help you or kill you, or simply steal your horses at night. Given that and more, how do you find your way through this maze of hills and mountains to the small mining town of Virginia City?"

You'd need a good guide. Someone to lead you away from danger and toward your destination. He would be a person with long experience in this region, was cool under pressure, and knew how to deal with hostile parties, and recognize friends.

You needed a man like Jim Bridger. Other early mountain-men, trappers and guides get better press, but for my money, Jim Bridger was the best of all of them. His career out west spanned decades, and his reputation soared above all. Illiterate, and plain-spoken with a thick mid-west accent, he had the mountains, rivers, canyons and trails written in his head and never got lost. Others made poor decisions and got themselves lost or killed, but Bridger lived a long and happy life out west, and retired to live out his life with his family back in the midwest.

In case you didn't know. I'm a big fan of Jim Bridger.

He brought the first wagon train of settlers to Virginia City, picking a safer trail than his rival John Bozeman (who was later killed by indians – need I say more?).

Bridger was also one of the first to view the wonders of Yellowstone and was never taken seriously until the region was explored by others who finally confirmed his fantastic stories of hot springs, geysers and (my favorite) a stream that split into two, one heading east to eventually join the Missouri and Mississippi to empty into the Gulf of Mexico, and the other to roll down west into the Snake, the Columbia and eventually the Pacific Ocean. The place Bridger spoke of is known as The Parting Of The Waters, and you can hike to it today in Yellowstone.

Anyway, I could go on about Bridger, Kit Carson, Sheridan, Custer and more from that era. But I'll just say it's an amazing time of American history that deserves more attention.

The dogs were hot. It was another ninety-plus day. So we took in the town for a couple hours, keeping in the shade as much as possible, then headed back north on a scenic drive past several other ghost towns on the way to the Jefferson river valley and our campsite where we found a nice little spot on the river to cool off. 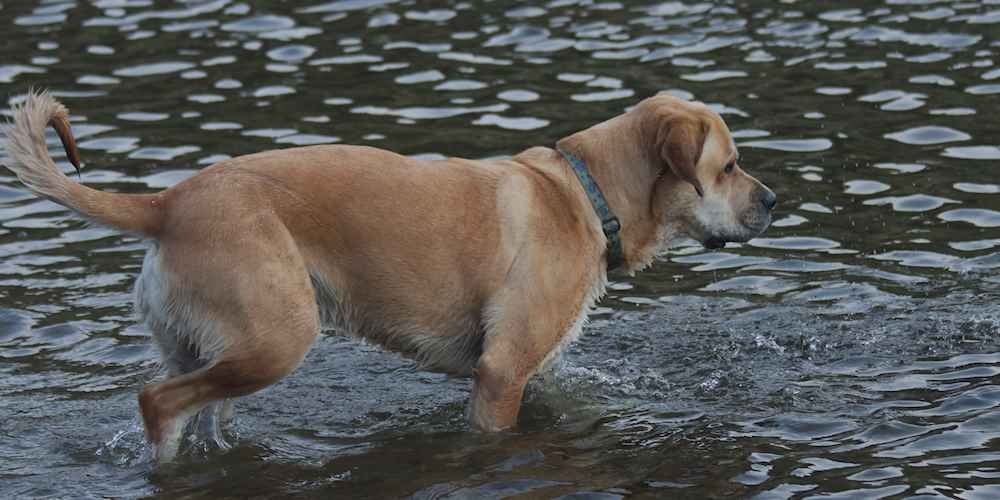 How hot was it? Even Hudson -who is terrified of water- cooled off in the river.

The next day we visited Bozeman, but it was too hot to do much and we headed for home the next day.

*Not strictly true, but we plan our vacations with them in mind, always looking for dog-friendly venues, and rivers and lakes to cool them off.