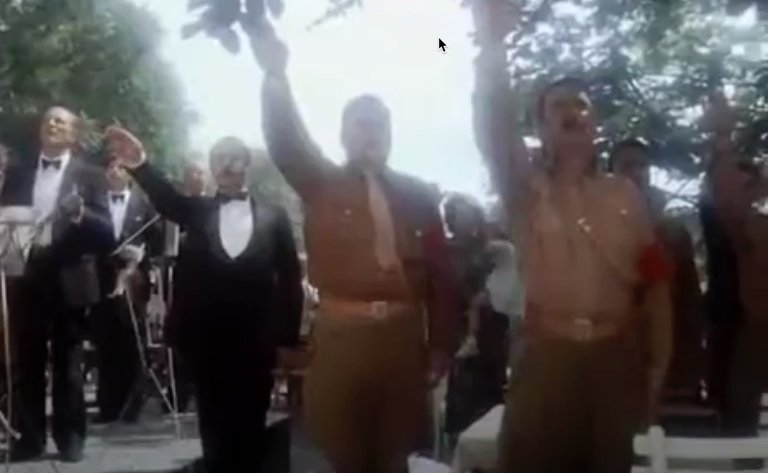 It's clear to anyone with eyes to see that BLM is the new fascists. If you think Burn Loot Murder are heroes, you need to read a little history.

Current events have a way of reminding me of the past; history repeating and/or rhyming and all that. In the present insanity there have been many moments which reminded me of a scene in an old novel from the mid seventies. In truth it was a scene that has stuck with me all these years since I first read it. And I’ve seen glimpses of it in real life again and again, perhaps proving the human truth behind the fiction, and confirming the brilliance of the author.

The scene which was brought to mind takes place in Berlin in 1939. The main characters, the U.S. Naval Attache to Berlin, Victor Henry, and his wife, Rhoda, are out to lunch with their American friends. Suddenly there is an announcement on loudspeaker that Warsaw has just surrendered to Germany:

To a man the diners in the Kaiserpavillon rose, all except the American party. On the beach, on the promenade, wherever the eye turned, the Germans stood still, most of them with arms thrust forward in the Nazi salute…

The American party, sitting in a restaurant full of people on their feet, was getting hostile glares.

“Do they expect us to stand?” Sally Forrest said.

The song ended. The Germans applauded and cheered some more, and began toasting each other…

At the Americans’ table the waiter started removing plates with a jerky clatter, spilling gravy and wine and jostling them with his elbows.

Of the many dramatic scenes in these novels (The Winds of War was a prequel to War And Remembrance), for some reason this one scene stood out in my mind.

I first read the novel in my teens shortly after it was released. That scene stuck with me all these years, even after the memory of the rest of the story faded away. I guess, as a teenager, I was hardwired to recognize situations in which others exerted pressure to join in and not stand apart; to hide in the crowd, and not be the target of it. So I put myself in that Berlin restaurant in 1939 and felt the isolation and pressure those Americans felt.

That's the only reason I can think why that scene of all, stood out and stuck with me all these years.

As a side note, I highly recommend reading both novels if you haven't yet. And if you have, you should read them again. The drama and horror of a worldwide war and how a whole people can be so easily dehumanized and nearly eradicated is a timeless lesson. It's also a strong reminder that we aren't so different from the Nazis, and that fascism and nihilism never really go away. They're like a bad penny and my dog's farts.

Of course, if we listen to the "experts", we are told the real fascists are old white guys like me. This is because we have the impudence to believe in such concepts as Due Process, Equality, Civil Rights, and Liberty. And race never enters into our thinking.

That's simply not acceptable to the new fascists.

The truth is, it is happening right now. Right here in America.

Peoples! I Do Peoples Too!