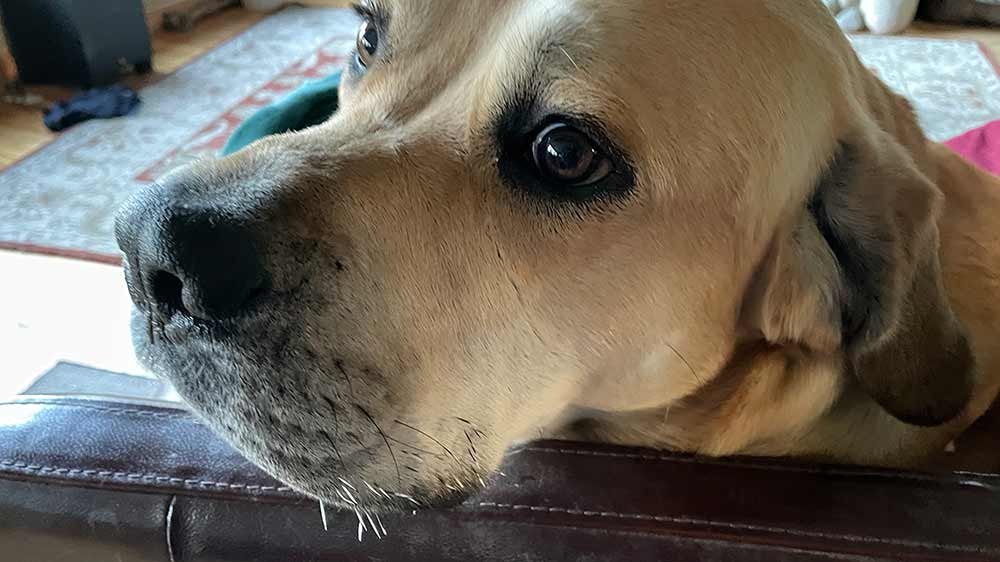 I held Hudson's head as snugly as I could manage without causing a panic.

The Missus held the needle-nose pliers and slowly moved them toward the dog's snout. She clamped the pliers shut. Hudson jerked back.

The Missus held up the pliers triumphantly, a porcupine quill extending from the metal jaws.

"That's one!" she said. The Porcupine Quill Removal Battle had begun.

Hudson is small for a mastiff. He's only 110 pounds or so. Still, 110 pounds can put up a mighty struggle when properly motivated.

The Missus and I were pulling porcupine quills out of his jowls. To Hudson, the first one was a surprise. The second one an insult.

By the third quill, he was well and properly motivated.

That was when the struggle began in earnest.

At one point, Hudson got loose and ran through the house looking for a place to hide. When that didn't work, he refused to hold his head still when I clamped down on him.

We plied him with 150Mg of Tramadol wrapped in cheese (it's how I take it too!), hoping that would calm him down.

After an hour, he was looking droopy.

I approached him and patted his head, gaining his confidence. I slowly wrapped my arms around him and held him tight. In a fierce struggle, the Missus successfully extracted a couple more quills.

Hudson, high on Tramadol and now convinced we were trying to kill him, decided he'd had enough.

You may have heard of the extraordinary strength exhibited by criminals high on certain drugs. And that these men can often fight off numerous cops attempting to subdue them.

It was like that. There was little to be done except try to hold him down and snag the quills as quickly as possible.

Outnumbered, Hudson still had one card to play…

When he began snarling and snapping at the mere sight of the pliers, we decided it was time for a break.

And The Winner Is…

"How many quills are left?" I asked, trying to catch my breath.

She counted the quills in Hudson's jowls.

We looked at each other. Then at Hudson, who was giving us the Thousand Yard Stare.

"You know, the vet's not that expensive," I said.

"I'll take him in the morning."

Would you do me a big favor?

Please consider sharing this post on your social media account(s) using the convenient buttons below. Doing so helps spread my curmudgeonly views to a wider audience. I'm congenitally incapable of understanding or properly using Facebook, Twitter, etc. myself because I suffer from Social Media Autism, a debilitating malady that I just made up.

So I desperately need your help. All it takes is a push of a button below. Thanks!