While he was with us, we had no doubt that Larry was the best dog ever. Time (and several newer dogs) have tempered that sentiment somewhat. It's not that Larry has gone down in status, he's simply got more competition.

Larry was our first dog. We were married in the fall of 1992. In the spring of 1993 The Missus brought Larry home. At the time I was just starting my home-based design studio and so I was home all day, which was perfect for a new puppy. Since I had hardly any business, Larry and I spent a lot of quality time together. I showed him how to sit, stay, and how to not walk into the street (we lived in the suburbs at the time).

Best of all, I taught him how to look at me for approval whenever The Missus gave him a command. This drove her absolutely bonkers, and it was a source of great amusement for all of Larry's thirteen years.

Stories of the Best Dog Ever

We lived on a corner lot near an elementary school. Each morning, Larry would insist on being let out in the backyard early enough so he could get petted by the kids as they went past our house on their way to school. All the kids knew and loved Larry.

Once, I forgot to close the gate to the backyard. When I realized my mistake, I panicked. A quick look into the backyard confirmed my worst fears: Larry was not there! I knew I had to scour the neighborhood and find my dog and I had no idea how long he'd been gone. He could be anywhere! As I stepped out the front door with these frightening thoughts in my head, I almost tripped over Larry, who was sitting on the front porch, waiting to be let back in.

He knew where his bread was buttered.

On long trips, he shared the back seat of the car with our daughter, who constantly complained that he took up too much room. We laughed and told her to suck it up, because Larry was our favorite child.

A couple came over one day with their small toddler. They were worried because Larry was a big dog, about 95 pounds. They didn't want their baby to get hurt. I told them not to worry and we plopped the baby down in front of Larry without a concern, and watched as he reached into Larry's mouth and pulled out his tongue. Larry sat there, a puzzled look on his face, not knowing what to do. This lasted a good minute or so until the baby, laughing the whole time, finally let go. It was at that point our friends decided Larry was no threat to their kid.

He Left Us Far Too Soon

We had so many good times and memories with Larry, I could go on and on.

Larry suffered a severe stroke in August, 2006. A few days later, we said our goodbyes and had him put down. Now living out in the woods, we buried him on the hill down from the house, in a place where he liked to sit and watch for visitors.

I gave this portrait to The Missus for Christmas a couple years ago. When she opened the wrapping, she cried. 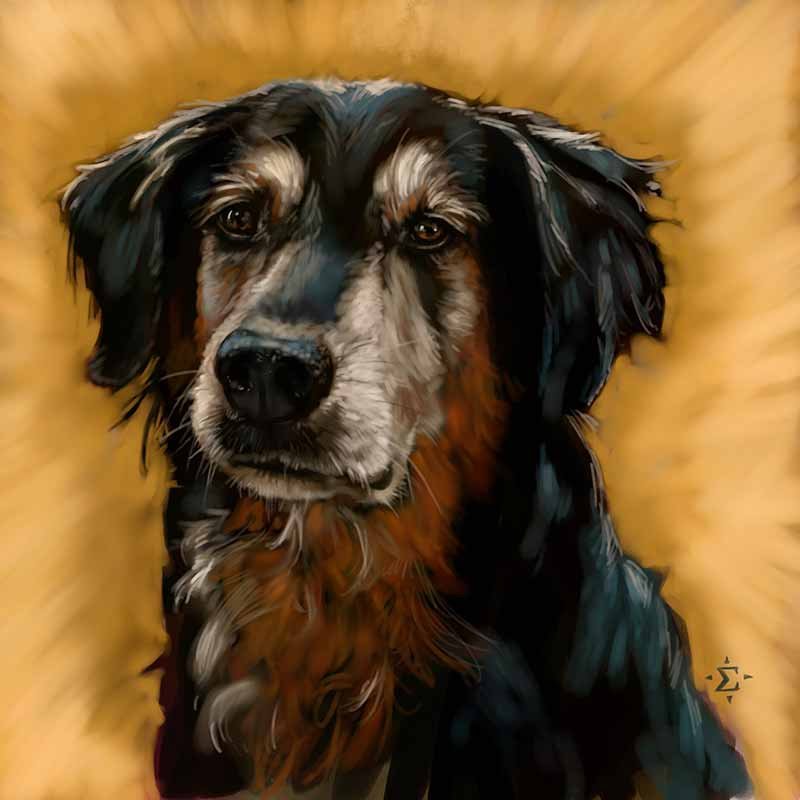 Larry. If not the best dog ever, certainly in the top ten.

Max With a Stick

Snow Wrestling with Beorn and Jasper