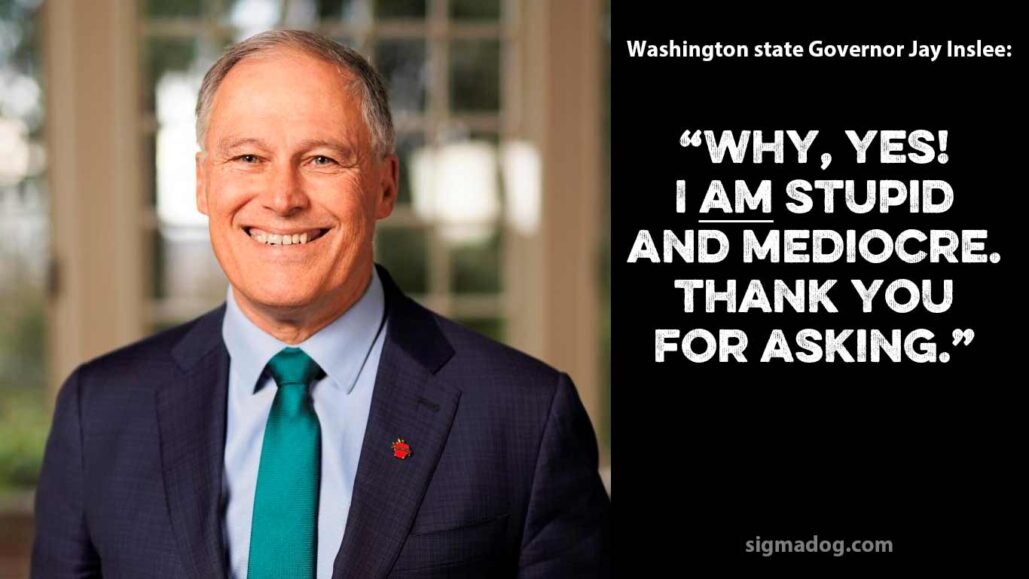 Dude! Did you think of that yourself or did the bubble bath, plastic boaties and rubber duck help?

“What aircraft carriers were in World War II, masks are today.”

This is not just stupid, this is a black hole of Stupid so densely Stupid it attracts all galactic Stupid to itself, and gathers into a whirling mass of Stupid so thick and heavy that not even logic can escape. Eventually this Stupid Hole will collapse into itself possibly forming a Stupid Singularity in a Stupid Bang, and the Stupid Energy released will form a new universe of Stupid, with Stupid physics that reflect the ultimate stupidity of Inslee’s original Stupid Statement.

On further reflection, the only way this Stupid statement makes any sense at all is if we think of WWII aircraft carriers as weapons of coercion, a means to force compliance of the enemy. In other words, in the mind of Governor Inslee we, the citizens of Washington state, are the Enemy and masks are a weapon he uses to force compliance.

Someone please tell Governor Inslee that it wasn't aircraft carriers that forced Japanese compliance, it was atomic bombs.

He can only plead ignorance here, or else he would have to admit that what he REALLY wanted to say was "What Atomic Bombs were in World War II, masks are today." But he's not going to say that, probably because it's too close to an uncomfortable truth; that mask mandates are destructive to an open, free society.

It's the sort of crude and ridiculous thing only a sad and pathetic man would say.

And Stupid. Did I say Stupid?

It’s a fever dream of Stupid combined with Inslee’s proven mediocrity, tossed together foolishly like ammonia and bleach to form a new poisonous Stupid with the potential to destroy common sense and logic, thereby putting all previous Inslee Stupid to shame.

That is, until the next time he speaks.

We may never know what synapses fired in Inslee’s tiny quark-sized brain that caused this cat abortion of Stupid to flow forth, but one thing is clear, as long as air remains free, he will be using it to form verbal Stupid Bombs, like some drunken fart hammer in a bar trying to impress an exhausted and irritated cocktail waitress.

And this, Ladies, is the lesson for today summed up:

“What drunken fart hammers are to cocktail waitresses, Governor Jay Inslee is to Washington.”