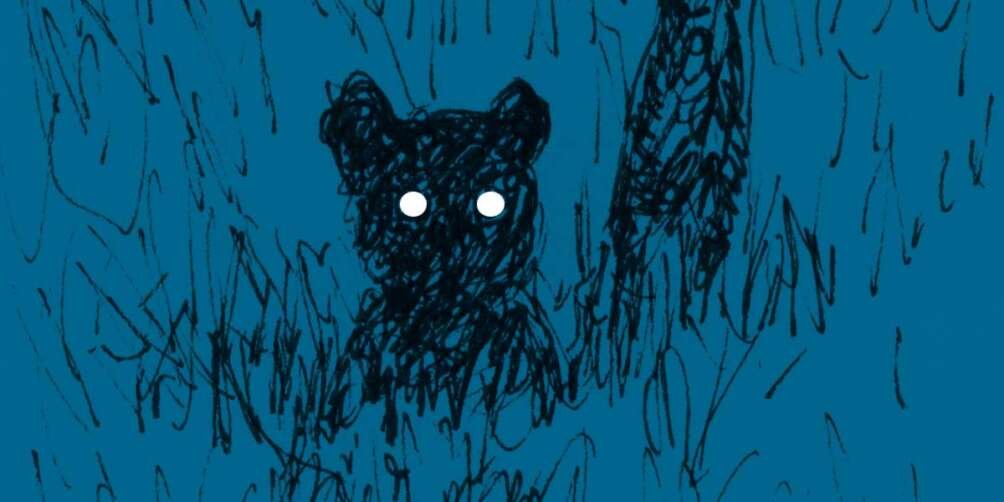 About 1:30 in the morning I'm awakened to the sound of big floppy ears swatting the side of my dog's head. Even asleep, my ears are finely tuned to certain sounds, like gunshots, thunder, puking dogs, Salma Hayek's sultry voice (never happened, but I'm ready if it does) and, in this case, Hudson's shaking head.

It's HudsonSpeak for "Take me out to pee, Hooman."

Being well into my sixty-first year, and possessing a prostate of approximately the same age, I too had a similar urge. So off we went. I was still half asleep and groggily grasping at light switches, trying to clear my eyes enough to be sure of the stairs I was descending.

One of the best things about living in the middle of the woods is the distinct lack of any need for modesty. I was in my underwear and sandals (because gravel), and Hudson, aside from fur, was completely naked (because DOG).

I turned on the exterior lights and grabbed a flashlight, and we exited the house, Hudson trotting ahead of me with a bit more urgency than usual, and me staggering behind, still bleary-eyed. As he turned the corner around the garage, he gave out a bark.

Hmmm. He never does that.

Now I was almost awake, and thinking "Porcupine!", so I hustled up and rounded the corner, ready to call Hudson off his favorite prickly prey.

I immediately noticed that one of my three garbage cans was knocked over and another was completely missing.  And Hudson was bounding up the hill next to the house.

Momentarily confused by the situation, I stood there slack-jawed.

Then I heard the snarl. I heard the roar. And I heard something big rushing down the hill towards me through the tall grass.

I was now completely awake and alert. I was so awake I could solve algebra equations without writing anything down. I could remember what I had for breakfast the day I got married thirty years ago. But algebra and fond memories weren't going to do much to stop the…

Hudson had already figured it out. He came bounding out of the grass, shooting past me and beating me to the door, giving me a look that could only mean: "All I need to do is be faster than you."

I jumped up the granite steps, tripping on the top one and sprawling face-first on the deck. My nerves had no time to feel anything as I was already up and through the door by the time the pain impulse reached my brain.

I slammed the door shut and looked at Hudson, who was wagging his tail as if to say, "That was fun. Let's do it again!".

My heart was pumping so loud and fast I could have danced to it if my legs weren't shaking. I went upstairs and informed The Missus of our nocturnal visitor, stating in as calm a fashion as I could muster, "WE'VE GOT A BEAR!!! A BEAR!!! OUTSIDE!!! WAKE UP!!! I'M TELLING YOU WE HAVE A BEAR OUTSIDE!!! IT CHARGED US!!! IT'S EATING THE GARBAGE OUTSIDE!!!"

She looked up at me with bleary eyes, rolled back over and said to her pillow, "So stay inside," and fell back asleep.

Not to be overly critical, but I bet Salma Hayek would have been more sympathetic.

Giving my heart a chance to slow down, I paced around for a few minutes.

Knowing sleep was a distant city I would never visit, and curiosity getting the best of me, I grabbed a stronger flashlight – one that, if you looked directly into it, would leave smoking holes where your eyes used to be – and carefully, quietly, went back outside. I guess I was concerned for the well-being of my garbage.

I cautiously rounded the corner of the garage. Nothing.

I stepped forward and shone the flashlight up the hill.

A tiny, furry black head popped up out of the grass like a Jack-In-The-Box. It's eyes as big as surprised saucers. It popped back down, scurried a few feet and then climbed up a nearby tree.

Deciding the garbage would just have to fend for itself, I hustled back inside.

We've lived out here over twenty-two years and this was the first time we ever had bears in our garbage. The next day I picked up what trash was left and bagged it. I found the missing trash can, but never located the lid (did they eat it?). The cans (and trash) are now housed safely in the shop.

Bears are like bums. If you encourage them, they'll just stay and invite friends. Next thing you know, they're hanging around your front door, flirting with your daughter,  and asking if you're gonna eat all that PopTart®.

Incentive removed, the bears moved on to plunder the neighbor's place where trash bags are tossed into an open trailer. Easy pickins!

That was mid-July. But wait! There's more!

This last weekend, the neighbor's german shepherd chased a large mountain lion up a tree near the edge of our property. It stayed there for a couple hours before escaping into the woods and possibly killing a neighbor's dog (we heard barking, then gurgling).

As of today, our dogs remain uneaten. I'd like to keep it that way, so I'll be packing heat on our morning walks henceforth.

Bears in July. Cougars in August. Coming in September: Wolves, I'm sure.

Well, we moved out here because we wanted to be close to Nature. And I hope to keep viewing it from the outside, not the inside.