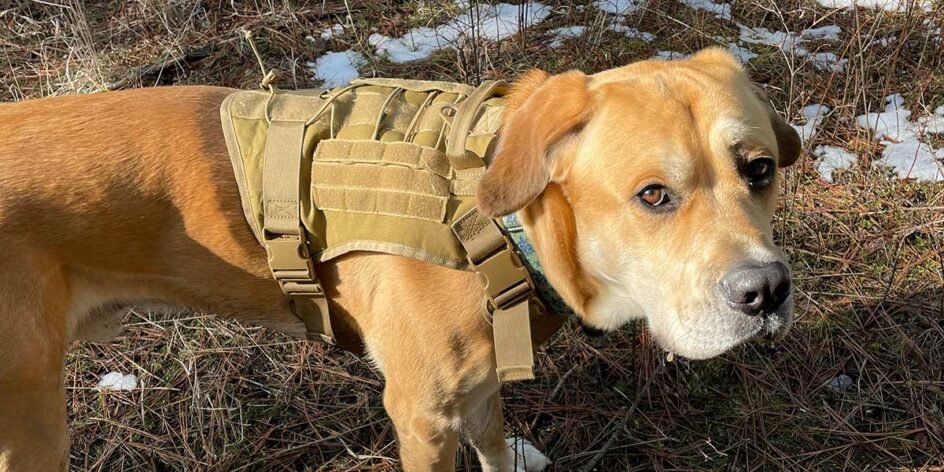 When we go out in public, Hudson wears a harness. It's a tan nylon number with hook and loop Molle straps for attaching accessories, along with an elastic string for strapping down whatever he might be carrying.

But those features aren't the main reason I bought it. It also has, on the back just behind his neck, a secure metal plate with a hole for attaching a leash.

To me attaching a leash in that spot is far preferable to snapping it on his collar. Hudson's a puller, and I don't want to get in a tug-of-war with him when he's wearing his leash hooked to a collar. Doing so would cause him to choke and could seriously injure him.

With his leash attached to the harness, he can still pull, but when I pull back it doesn't hurt or choke him.

I had an interesting conversation with a guy in a parking lot about Hudson's harness.

We were at a fast food joint, The Missus was inside getting our order and I was at the back of the car. It's a compact SUV with a big back door that opens vertically, so I was there keeping the dogs company and giving them some fresh air.

Guy walks up. He's a big guy, a bit overweight with a lot of tattoos.

He liked Beorn, of course. Bernese Mountain Dogs are always showstoppers, and Beorn knows and expects it.

We were talking about breeds for a couple minutes when Hudson came to the back of the car.

"Wow! That's a nice harness! Is it tactical?"

I didn't know how to respond. Tactical? What's that?

Ignoring my silence, he continued, "So, do you keep extra mags on it?"

Mentally catching up, I said "Only if I want to die."

"If I kept all my extra ammo on this dog, if I was unlucky enough to find myself in a gun fight, at the first shot he'd sprint for safety as fast as possible, taking all my ammo with him. So, yeah, it's tactical if my tactic is dying."

He chuckled at that. The guy was nice enough, and we talked a bit further about Special Operations dogs and how they are trained to jump out of helicopters and whatnot. The guy was really into it.

Honestly, it's a cool subject and I enjoyed talking about what I had seen and read about. But I wasn't able to offer any special insights. I'm a fat-assed civilian, so what the hell do I know?

Eventually his wife came out, he thanked me for my time and they left.

It was a weird conversation. Tactical? Yes, I could strap all my protection on Hudson and hope he sticks with me when things go bad. Like I said, dying is also a tactic, though not exactly plan A.

I know my dog, and what his limits are. At just two years old, he's not going to stick around and Alamo it with his Daddy. He's gonna scamper outta there and hope to find a new, more peace-loving Daddy.

That's his tactic, and I can't argue against it.

In truth, if such a situation were to arise I'd probably outrun him.

Returning to My First Love