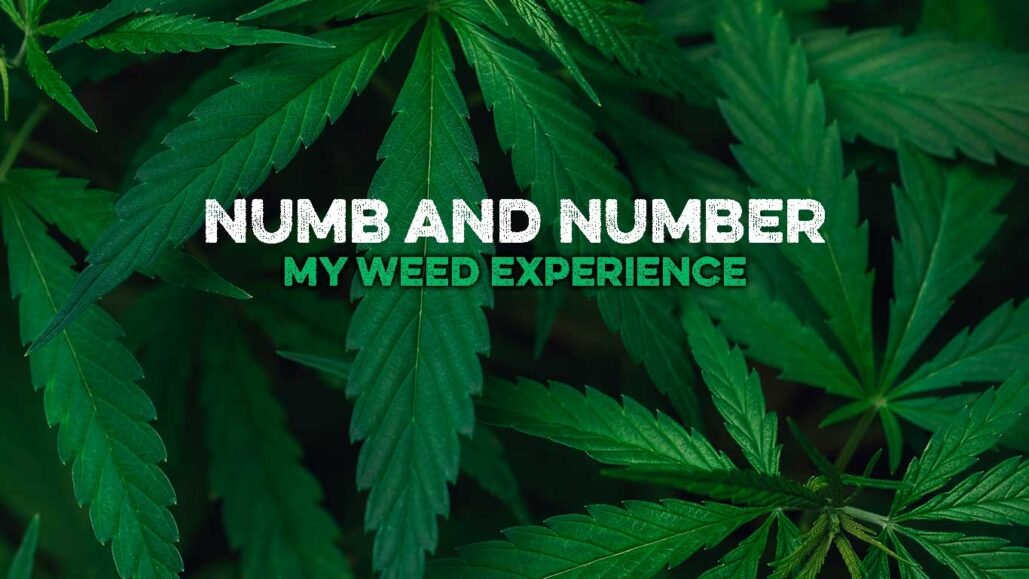 I had weed for the first time. This is the story of my weed experience.

A month before, The Missus and I went to a wedding. At the reception there was a Weed Bar. I didn’t partake, but later they handed out some two-inch square Cannabis brownies/caramels. I saved one and brought it home for later.

I was talking to a Marijuana frequent flyer (Frequent Higher?). He told me that since I’d never had pot before, I should go easy my first time, and suggested I should only eat half the brownie. So that’s what I did one Friday evening.

They say a properly cooked pot brownie doesn’t have any weed taste. Perhaps the cook in this case was sampling his batter too much, because mine tasted like a little bit of chocolate dust sprinkled on dirty moss that was dunked in cat piss. I could barely choke it down, but I did because SCIENCE.

Then, I sat down in a comfortable recliner with a book to read, and waited.

What was I expecting? Honestly, I'm not sure. Not having ever been interested in Marijuana, I never paid much attention to descriptions of the effects. I suppose if I had been asked, I would have said it would be fun to experience some kind of heightened awareness, and maybe some visual shenanigans ("Hey! The TV is floating away! No, wait! That's me! Cooooool!"). But truthfully, I didn't have anything in mind other than to maybe get an understanding on what the fuss was all about, to learn why weed is so damn popular.

So I read my book, The Republic of Pirates: Being the True and Surprising Story of the Caribbean Pirates and the Man Who Brought Them Down, by Colin Woodard, and waited.

Within forty minutes, having finally made it through the book title,  I began to feel something. A slight tingle spread over my body.

I woke up an hour later.

With effort, I pulled myself up out of the recliner and dragged myself off to bed. I slept without dreams.

I woke in the morning and spent the whole day feeling lethargic and tired. There was no ambition, no desire to do anything. I had a severe case of Zombie Head, like the hangover from a sedative, except it lasted all day.

I could not think clearly. Conversations were confusing. My brain remained unengaged, and I exhausted myself searching for simple words to complete the most basic sentences.

On any normal day, I tend to spend a lot of time thinking. It's a creative exercise and helps me sort out and develop ideas for art, design issues, and my thoughts on the world in general. Hungover from pot, I could do no thinking at all. My day was a vast intellectual wasteland of blank stares into nothing, and by the end of the day I just wanted my familiar, flexible, creative and curious mind back.

Fortunately, by the next day the confusion and laziness had passed, and I was able to assess the experience.

If I wish to alter my mind, I will in the future opt for the traditional method of a good stiff drink or two. This method is vastly preferable to weed because the effect of a moderate amount of alcohol is good feelings, happiness, and a certain level of free-associative creative thinking which I can remember even if I’m hungover the next day. The hangover, if there is one, only lasts half a day, and if I have work to do I can usually power through it with lots of water and a Subway® (my preferred hangover food).

With weed, the effect is to make me feel nothing and the hangover is a listless fatigue that lasts nearly 24 hours. As if that's not bad enough, I don’t even have the fun memories to look back on.

So weed offers me none of the benefits of alcohol and twice the hangover.

For me weed is a big steaming pile of nothing. It’s worthless and pointless and actually inhibits my happiness and creativity. It takes away my ambition, prevents basic thought processes, and leaves me feeling numb and disengaged.

In a way, I suppose it’s a drug that embodies our time in history: Stupid, lifeless, and confused.

So that's it. I had my weed experience, and as far as I'm concerned I don't ever need (or want) to repeat it.

In relating this to Frequent Highers I know, I’ve been told that I must have done something wrong, that I had a bad batch or something. Either way, I need to try it again, they said.

It hasn’t been done right? I have to keep trying until it works? Really?

If your defense of marijuana sounds exactly like a case for Socialism, you’ve already lost the argument.

Never again. I'm One And Done with weed.