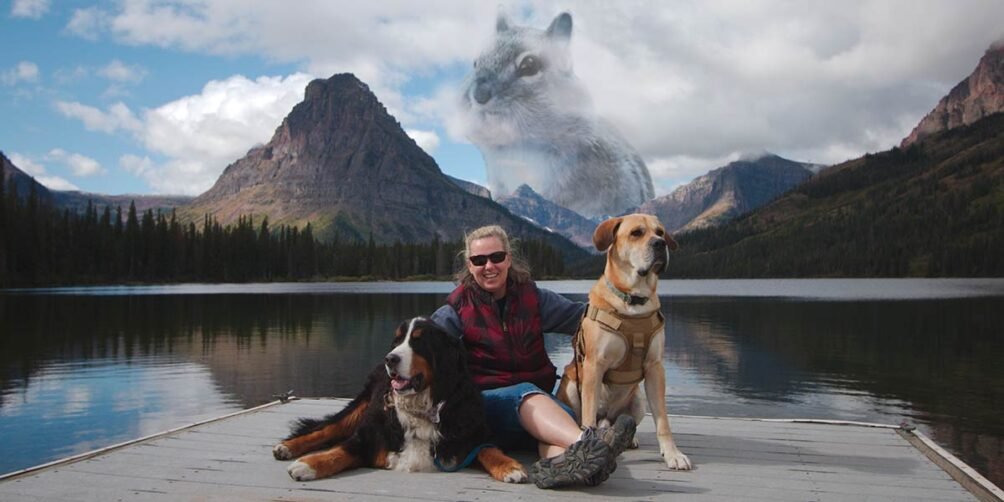 I'm awakened in the early morning. The sun is still an hour away, but there is a dim glow from the eventual dawn. It's not the feeble light that has pulled me away from dreams of sultry Latin women with long black hair feeding me spicy chicken wings in a jacuzzi. No. What has wakened me is a nearly unbearable weight pushing me down into my bed, along with a hard cold pressure against my face and repeated gusts of wind relentlessly blowing in my ears.

I don't usually have this problem at home, where we are fortunate to live in a secluded forest with nothing to disturb our sleep such as roving bands of zombies they so often get in the suburbs (don't try to talk me out of it, I've SEEN the television shows). To me, this is Paradise. I'd probably never leave our hilltop if it weren't for a peculiar character flaw of The Missus.

Surprisingly, the daily sight of my old, sagging, grumpy unshaven face strikes The Missus as somewhat monotonous. And for some mysterious reason, she desires social contact with… I can barely even type the words… other people. I don't know for certain from where this strange desire arose, so I'll blame Facebook, and Vladimir Putin.

In addition to contact with humanity ("Humanity? It's overrated," say I), The Missus also desperately seeks something she refers to longingly as "conversation".

Conversation? I'll have to look that word up.

As a result of this evident character flaw, every so often we are forced to load up the dogs, hookup our trailer and hit the road, trading the solitude of our secluded hilltop home for crowded campgrounds full of strangers.

And that's where I find myself now, pinned beneath unbearable weight, my face smashed against a metal wall, and a mysterious wind blowing in my ears. There's no sunlight yet, but the dawn of realization has sunk in: I'm not in a jacuzzi with Salma Hayek. I'm not home in bed.

It's early September, and we are camping just outside Glacier National Park. I'm laying in a tiny teardrop camper along with The Missus and our two large dogs, and I suspect I'm being used as a mattress and pillow for one or both of the canines.

Inside the camper we have a king-size bed, of which I've been allotted roughly eight inches, which apparently does not provide enough room for Beorn, our 125lb. Bernese Mountain Dog, who I can see out of the corner of my eye has me pinned. My face is pressed against the wall, but I manage to turn my head enough to see two dark holes, like a double-barrel shotgun pointed at my face. Looking down past his nose, I see Beorn laying his head comfortably on my shoulder. His eyes are open.

"Good morning, Buddy," I say, noticing that I can't move my legs.

Looking down, I see Hudson, our 110lb. Mastiff, using my thigh as his pillow. 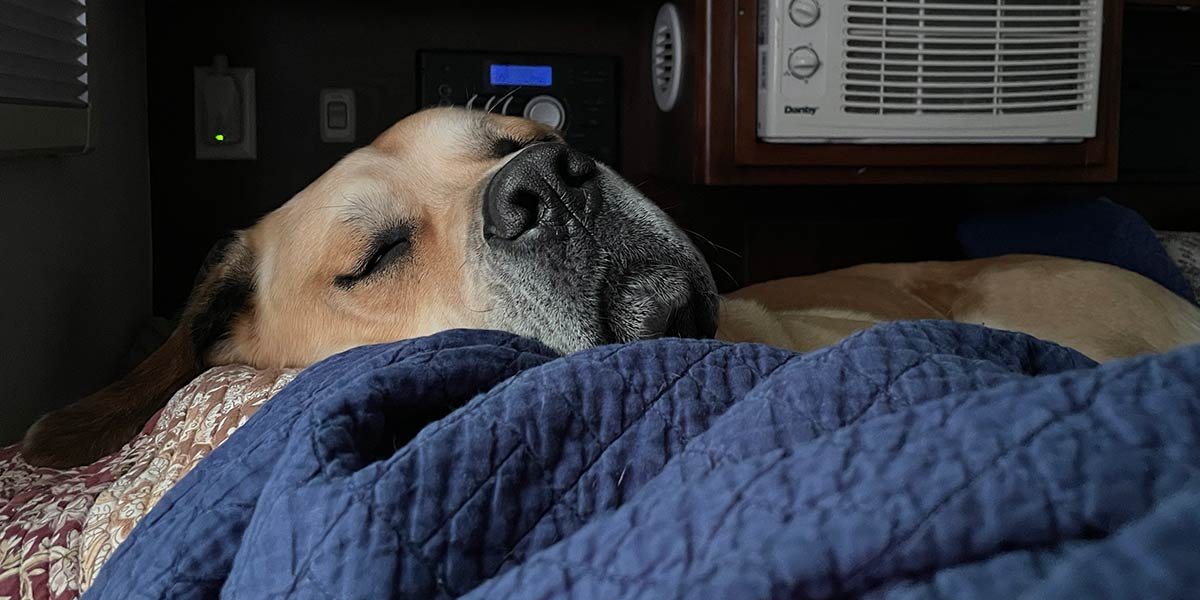 Both of their tails begin wagging.

I look across at The Missus, comfortably asleep under heavy, dog-free blankets.

Ah! The joys of camping!

When camping, our dogs provide the hook that draws people to us. Our dogs are huge and adorable to most everyone, with the possible exception of cat ladies and that one guy on the trail who came around a corner and thought Beorn was a bear.

"I think you might need this," I said as I handed him one of Beorn's unused poop bags.

It was our first visit to Glacier National Park, but it won't be our last. It's an exceptional place, with stirring views everywhere you look. And there are lots of warnings about bears and other wildlife. Like most, we were hoping to see some large animals from a safe distance.

But it's not just the large animals that can kill you.

I was driving the Going To The Sun road, a very scenic drive which roughly divides Glacier in half. The road skirts the steep cliff edges and is narrow with many hair-pin turns. Our car was on the outside lane, which meant we were mere inches from a sheer thousand foot drop with only a short retaining wall between us and certain death. 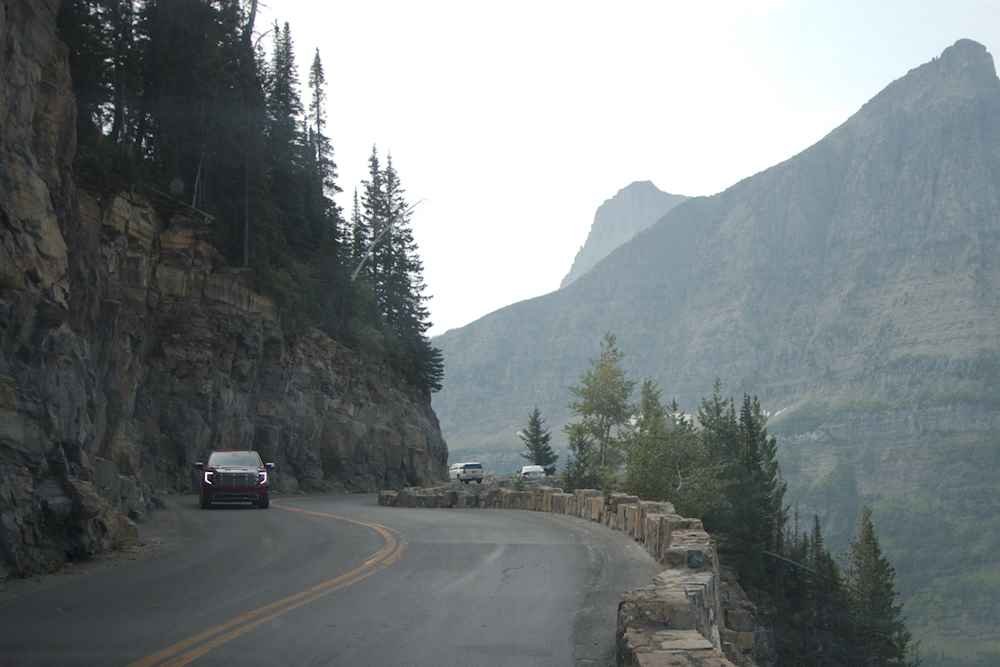 The dogs were in the back, and the Missus was riding shotgun, nervously looking out the side window down into… nothing.

We were doing fine until a small chipmunk darted out into the road.

"Oh no!" I said, "A chipmunk!" and keeping a solid grip with my left hand, I loosely slid my right hand over the steering wheel quickly as if executing a radical swerve to the right: A turn which would have taken us over the side of the mountain.

"GAAAAAAAH!!!!!" screamed The Missus, bracing herself against the door and the dashboard. "WHAT THE HELL ARE YOU DOING?"

Then realizing we weren't actually turning, she executed a long string of unprintable words, which shocked me until I remembered she once worked in a tavern; one which must have been frequented by sailors.

"Naw. He dodged us just fine. I think he's one of the Park's Attractions. Maybe even Animatronic." A pause, then, "Good thing Hudson wasn't driving. You know how he loves to chase chipmunks."

We continued, wondered at the stunning scenery, and shot a few photos. But we never saw a moose, or a bear, or a mountain lion, or even an elk, all of which we regularly see at home.

Nope. Just a chipmunk. And it nearly cost us our lives. 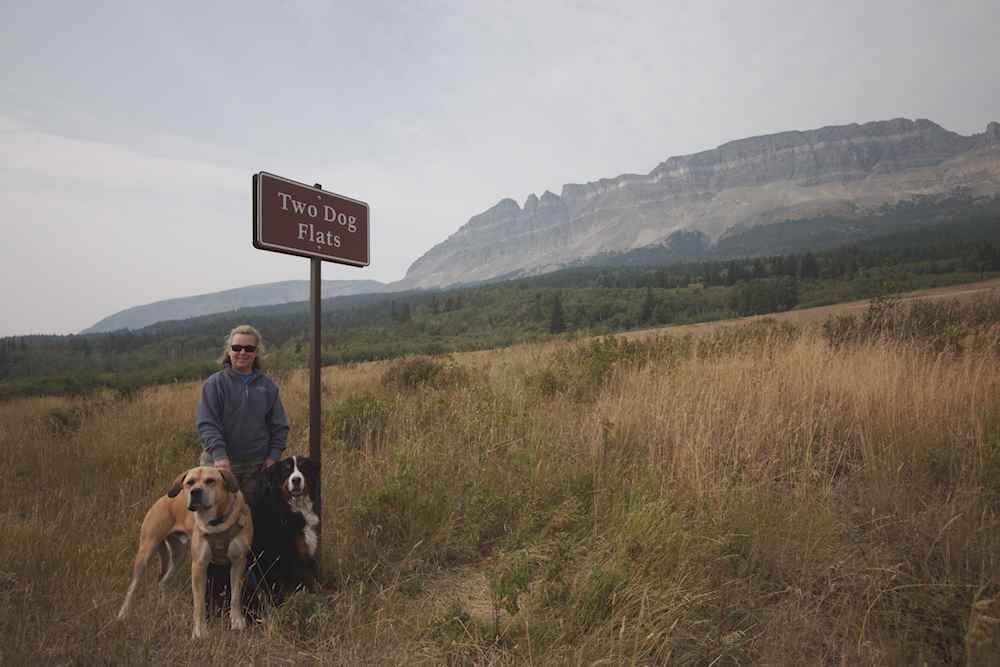 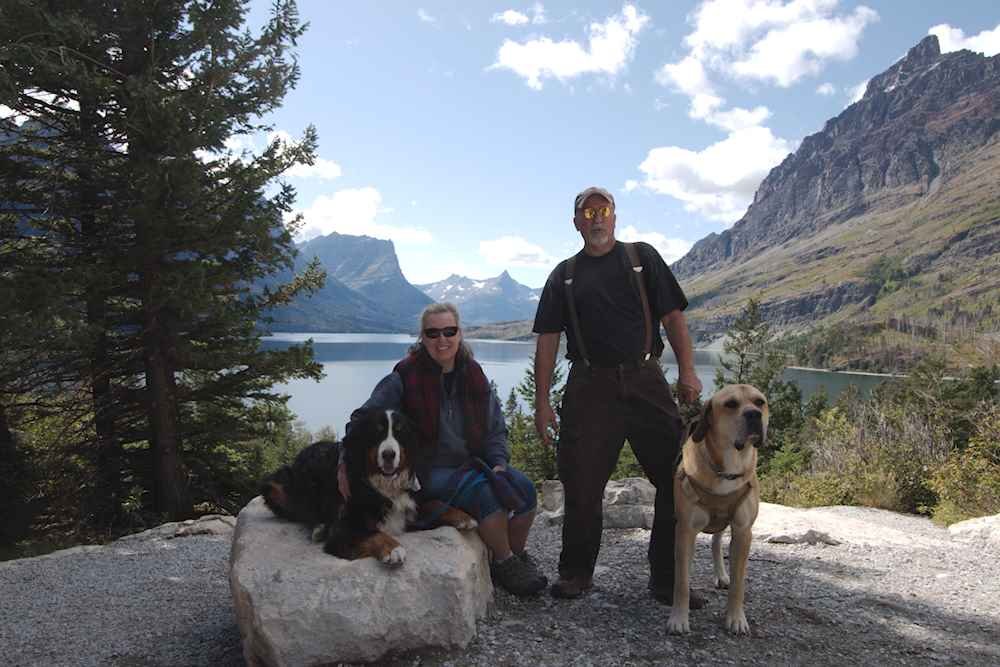 The Family. Two dogs, a lovely lady, and a cranky old fart