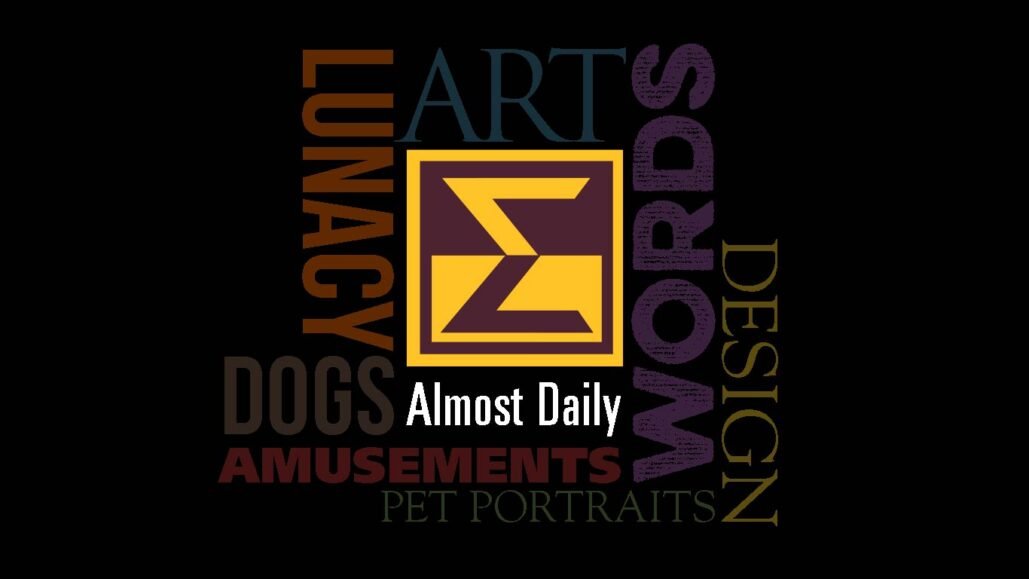 I’ve been in the commercial art / graphic design biz for forty-two years. While I know I look old, mentally I'm still in junior high, as indicated by the frequency of poop jokes.

In 1979 I was a senior in high school working afternoons at the Sears Corporate offices in downtown Seattle. My job was doing paste-ups for weekly Sunday newspaper circulars. There was next to nothing in the way of creativity involved (other than figuring out how to squeeze a stock-art image of a Kenmore® washer into a 2” x 3” box along with descriptive text while making the price as big as possible). It was, essentially, the bottom rung in the commercial art field, and I don’t regret it at all because it was a good, practical start. I learned how to manage my time; meet deadlines; size art and type; work with others; ask advice; maintain a clean layout; make straight lines using thin spools of 1pt. tape; and all this while almost avoiding cutting my fingertips off with ultra-sharp X-acto knives.

But mostly I learned I didn’t want to do mind-numbing stock-art circulars for the rest of my life, so I went to college (Yay! CWU!) and earned a Bachelor’s Degree in Graphic Design.

In college it was impressed on my mushy, beer-soaked brain that design isn’t about simple arrangements of elements. Design was first and foremost an Idea that drove those elements and arrangements. The standard way of conveying this is "Form Follows Function", but I think alliteration is dumb (especially when someone else comes up with it first) so I prefer that line's lesser known and slightly retarded but very friendly second cousin, Design Follows Idea.

Back then we were Artists. Our medium was 1) Ideas which we conveyed through 2) images, 3) text, 4) on paper using 5) modern printing technology, and in service to 6) Capitalism. In order to succeed, we had to be specialists in each of those first five areas. The last one, Capitalism, was also important to our career success because it was the crucible that purified our abilities or burned us out and sent us to Subway College.

Capitalism (in my view) was essentially a meritocracy where only the successful survived. What we were doing was commercial art - that is, art in the service of commerce. If it drove commerce, then it was successful and lived to design another day.

The communists among us (and there were many) did their best to ignore that. If they could not, they moved into the Fine Art department and indulged themselves by creating paintings of Porno-Jesus. It was a constant motif running through the Fine Arts Department - a home for anarchists, post-modernists, perverts, and girls with body hair and B.O.

I won’t bore you with all that has happened since. All I need say is my career and those of my graphic design colleagues eventually became the bridge between old and new technologies.

The computer changed things, and for the better. We ditched our waxers and layout boards for a keyboard and mouse; and we never looked back.

Now we have immediate access to thousands of images and fonts; and making a nifty looking arrangement of elements takes a fraction of the time it used to take. Everything is clean and there’s no technological barrier to going into business for yourself because the tools are ubiquitous.

And that is also the problem. For many it seems the tools have overshadowed the underlying importance of good ideas. That’s a shame because ignoring the value of good ideas inevitably cheapens what we do as designers. Without a solid idea behind it, a “design” is just pointless eye-candy. It’s all too easy in Photoshop to give Queen Elizabeth a chicken head, but should I?

Now even the cost barrier of the tools is no longer there. I myself use the desktop version of Adobe Creative Cloud, which costs a pretty penny every year. But there are now online tools that advertise “professional design” templates for free.

Is The Temple of Design Now the Template of Design?

A good friend and colleague wrote to me expressing his frustration that, after nearly a half century of creating solid idea-based solutions for our clients, we now have to compete against free design templates that promise “Everyone can create professional designs!” This turns the traditional Design Follows Idea on it's head. Now one finds a template (design) and generates an idea to cram into it.

Funny how the wheel turns.

In 1979 a mush-brained high schooler interested in a career in commercial art could arrange clip-art in pre-set formats, which was considered an entry-level job.

By 2021 anyone can use a free online service to arrange stock art into pre-set digital templates and this is now “professional design.”

There are at least two ways to look at this:

1. As technology advances, old ways of doing things are replaced, and those invested in old ways must adapt in order to survive the new reality.

2. Technology will never replace the need for a good idea to drive the project; and without an idea behind it, you’re not a designer, you’re a decorator.

"Without an idea, you’re not a designer, you’re a decorator."topdog

As designers, we do need to adapt to the realities of the current market, but I think that means doing more to educate clients on what we offer. We know people respond best to ideas. It’s a constant battle to get clients to value ideas over empty decoration. We need to teach them the simple fact that design always follows the idea. Sites that confuse decoration for design only make our job more difficult.