On this day 27 years ago I gave up ever earning another paycheck. This is SIGMA's 27th Birthday. Here's how it all began…

Once upon a time, back in 1992 Faith and Steve got married. They became The Merrymans.

Faith worked in sales for a large hotel chain in the Spokane, Washington region, and Steve worked in the design/advertising department for the corporation that owned (among other things) that very same hotel chain. That's how they met.

For the first few months of their marriage, their new lives together were wonderful. Things were stable. They were happy.

Then, one day, Steve came home with a big announcement.

"I've given my two week notice!" he said. "I'm gonna start my own design studio! "

"But," she said nervously, "I thought you were going to wait for a few more months to, you know, build up some savings"

"Nope!" answered Steve enthusiastically. "The time is right. It's now or never! "

So Steve left the corporate world to strike out on his own, while Faith watched and waited, hoping for the best and clipping coupons at every opportunity. 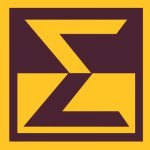 Steve named his studio SIGMA because he loved ancient languages and had developed the habit of signing his illustrations and paintings with a Sigma instead of his name.

It was slow going at first. Soon Steve realized he needed a real go-getter to drum up business for him.

At the same time, Faith had become disillusioned with the corporate world and was looking for a way out.

Steve, seeing a great opportunity, suggested to Faith that she should quit her job and come sell for his design studio.

So in 1993, Faith joined Steve as his salesperson/bookkeeper.

Twenty-seven years later, Faith and Steve are still happily working together, making SIGMA one of the best (and most stable) design studios in the region.